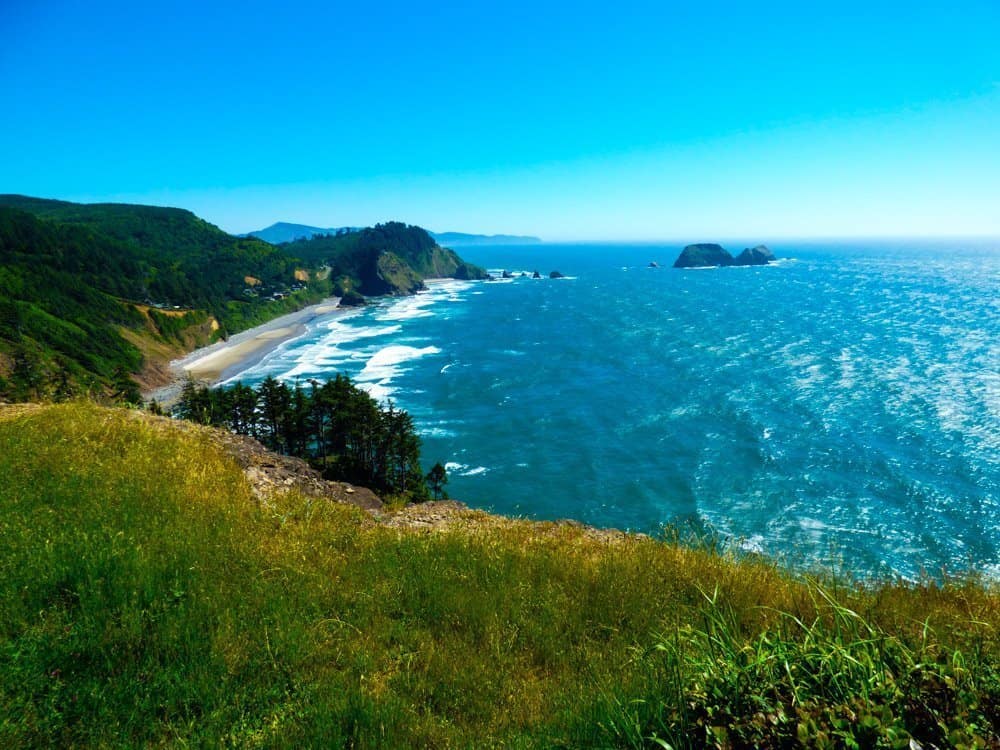 When we come “home” to the Pacific Northwest to see family and friends our traveling doesn’t stop. We are in one of the most naturally beautiful areas of the world where enticements like exploring the coastal towns in Oregon are around every corner, how can we stay still?

Two of the things we love to do in the Pacific Northwest are camping and road-tripping, so when we have the chance to put them together we jump at it. For this particular road trip, we teamed up with KOA (Kampgrounds of America) and set out to explore the stunning coast of Oregon.

Now, we are nature lovers and have done plenty of rustic camping with no electricity, running water and sometimes not even an outhouse. This is not the kind of experience we had with KOA. Exploring the coastal towns in Oregon with KOA Campgrounds provided the best of both worlds by allowing us to connect with the great outdoors without sacrificing convenience, comfort and cleanliness…the latter meaning we could visit the charming shops, restaurants and sights along the way without worrying about our “camping aura.”

The Astoria location is branded as a “KOA Resort” and it more than lived up to the name. It was so impressive that I hesitate to even call it a campground, although we had a tent to prove it. Our tent spot came with privacy barriers, a wooden shade and rain cover, a fire-pit and picnic table and even electrical plugins and lights. Although there were just the two of us the site was plenty big enough for a good-sized family cabin tent. Across the way was a covered outdoor community kitchen with multiple sinks, stove-tops, and grills. If tenting is not your style and you want ultimate comfort consider an RV rental and book one of Astoria KOA’s spacious pull-throughs. Or reserve one of the gorgeous cabins, with or without private bathrooms, that sleep 4-6 people for the ultimate Oregon glamping experience.

As for the grounds and amenities there was so much to do we had a hard time pulling ourselves away to explore the coastal sights and towns. There is an indoor pool and hot tub open year-round, a brand new seasonal outdoor pool, a Jumping Pillow, mini-golf, playgrounds, rental bikes, dog park and an activity building with basketball, family movies, board games, Ping-Pong, pool tables and arcade games. They also put on themed weekends and organized games and crafts. Plus meals are available and pizza will even be delivered to your site! 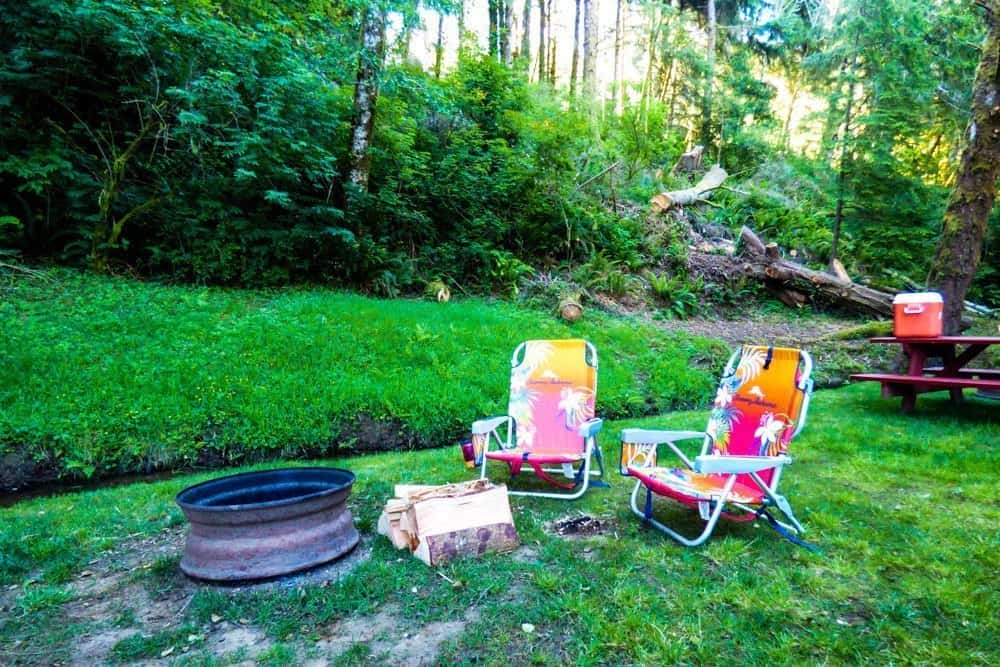 The Lincoln City KOA is not a “Resort KOA” and was much more in line with our original expectations of a good quality campground. The setting is much more intimate and nature based and our tent site was on the banks of a pretty stream backed by a lovely wooded stretch.

What the two KOA’s did have in common were clean and spacious community bathrooms with hot showers, a playground, cooked meals and a good-sized store selling pretty much anything you might need. They also offer pull-through RV sites and charming 1 and 2 room cabins that sleep, 4-8 people.

Historic Astoria was our first Oregon Coast road trip stop which was quite fitting actually as Astoria is the oldest US settlement west of the Rockies. Sitting at the mouth of the Columbia River, this commercial hub has a rich maritime and pioneer history which is best explored at the Columbia River Maritime Museum. Astoria’s other claim to fame is that it was the location for filming several classic movies including the “Goonies”, “One Flew Over the Cuckoo’s Nest”, “Kindergarten Cop” and “The Shining.” For a look at some of the famous movie memorabilia, a visit to the Oregon Film Museum is a must.

We were blessed with absolutely perfect weather on our coastal towns of Oregon road trip which made for a very enjoyable tour of some of Astoria’s top sights. Definitely don’t miss the birds-eye view from the top of the Astoria Column, a ride on the restored Riverfront Trolley and a visit to at least one of the three parks including the Fort Stevens State Park, home to the photogenic 1906 Peter Iredale shipwreck.

There certainly was no fear of us going hungry or thirsty either as Astoria has a great selection of places to eat and drink. In fact, as craft beer lovers we were excited to hear that Astoria boasts several stops on the North Coast Craft Beer Trail. We managed to make it to Fort George Brewery & Public House for some delicious pizza and brews and can also highly recommend the Buoy Beer Company for a very authentic experience and a tasty flight.

Seaside was Oregon’s first beach resort town and remains a top destination for family vacations in the Northwest. It didn’t take long for us to see why. The nostalgic 1920’s-era Promenade is perfect for walking or cycling along the beach and the beach itself is wide and clean and perfect for playing or relaxing.

The iconic Haystack Rock is just one of many reasons to visit Cannon Beach. Named one of the world’s most beautiful places by National Geographic along with a reputation of being one of the “100 best art towns in America” plus boasting a bounty of fine restaurants and craft breweries, Cannon Beach has it all going on.

We only had time for a walk along the sandy beach dotted with dramatic rock formations, of course taking plenty of photos, and then a little tour of the town. Next visit we plan to make time to walk to the waterfall at Hug Point during low tide, hike the trails at Ecola State Park and then head into town for a delicious meal and attend a play or concert at Coaster Theatre Playhouse.

We stopped at this little town for some decadent seafood chowder and fresh homemade crab cakes at the rustic Old Oregon Smokehouse. Rockaway Beach makes for an easy stop as the 101 runs right through it and you can also drive alongside the historic steam powered Oregon Coast Scenic Railroad which offers excursions along the bay to Garibaldi. We also ventured down to the 7 mile stretch of beach for a view of the Twin Rocks Arch.

Note: Just outside of Rockaway Beach on Nehalem Bay is Kelly’s Brighton Marina where you can enjoy fresh-caught crab cooked up for you on the spot or you can rent crab traps and catch your own.

Tillamook is home to the iconic Tillamook Cheese Factory where you can watch the production of some of the 170,000 pounds of cheese that they produce daily. It’s also blessed with five rivers, five bays and of course the Pacific Ocean so it’s a great spot for water activities.

Sadly we weren’t able to partake in the water fun or the cheese but what we did do is a branch off at Tillamook onto the Three Capes Scenic Loop. If you’re like us you may underestimate how long this 40-mile drive will take you due to the spectacular vistas around every corner. Plus a stop at the Cape Meares Lighthouse (the shortest on the coast) and the Octopus Tree is a must.

Note: We really regret not making time to stop at the award-winning Pelican Pub & Brewery in Pacific City. Somehow this awesome pub with a patio right on the beach and with views of another Haystack Rock slipped our attention when we were planning our itinerary. Don’t make the same mistake!

With beautiful weather and miles of beach perfect for combing and building sandcastles this is where we chose to spend our time. However, Lincoln City is one of the largest towns on the coast so there is also plenty to do away from the beach if you don’t get blessed as we did.

There is a good sized artist community in Lincoln City which means galleries and performing arts centers to peruse. There’s also the Chinook Winds Casino Resort, Lincoln City Outlets, Little Antique Mall the Salishan Spa & Golf Resort and the Game Over Arcade with over 100 video games and pinball machines.

Aaahh Newport, possibly our favorite coastal town in Oregon and arguably the most beautiful. It’s also the largest commercial fishing port in the state so there’s an abundance of freshly caught seafood to be had. We had lunch at one of the states famous Mo’s, overlooking the dock where fishermen bring in their catch to be cleaned. Another option is to buy some crab and oysters to take back to your KOA campsite and cook up for dinner.

We also spent some time exploring historic Bayfront with all the fun and fabulous eateries, storefronts and attractions and the quaint and quieter Nye Beach neighborhood with cute boutiques and cafes. On our next Oregon coast trip, we will definitely allow for more time in Newport to visit the Embarcadero Marina, Oregon Oyster Farms and South Beach Fish Market. We may even splurge on a fishing charter trip.

A stop in Yachats was on our list mostly to visit Yachats Brewing which is a funky mix of brewpub, general store and farmers market. If we hadn’t already stuffed our faces with seafood in Newport we would have had a bite at Luna Sea Fish House and Village Fishmonger and a taste of local vintage at The Wine Place.

Instead, we ventured on to Cape Perpetua Scenic Area and spent at least an hour trying to capture the perfect shot of the Spouting Horn and Thor’s Well. The ocean was a bit too calm for a spectacular Spouting Horn show but Thor’s Well was fascinating to watch as the water surged through a hole in the lava shelf then drained out to leave a 360-degree waterfall.

Next Trip to the Coastal Towns of Oregon

Sadly, this was the end of our KOA road trip to see the north and central coastal towns in Oregon. If we had time to go further we would have made stops at the famous Sea Lion Caves and the fishing village of Florence. We’d also love to do some coastal hiking on trails like the Samuel H Boardman State Scenic Corridor.

Plus we didn’t even touch on Oregon’s south coast with the otherworldly landscape of the Oregon Dunes, the scenic towns of North Bend and Coos Bay, Bandon‘s beach rock formations and of course the numerous photo worthy beaches, lighthouses and state parks. Fortunately, there are also KOA campgrounds in Waldport, Oregon Dunes and Bandon so a new itinerary is already in the works!

Pin It For Later

Full Disclaimer: Thank you to KOA for hosting our stay for this Oregon Coast trip. As always all of our opinions are entirely our own.

Born in England, Sarah developed her wanderlust at a young age as she traveled around Europe with her parents. As a young adult she spent every penny she could on experiences as opposed to possessions. Eventually she found a way to earn a living doing what she loved: traveling, writing and capturing images of the wondrous world we live in. When not on the go Sarah enjoys time in her “sometimes home” of Vancouver.

Amazon Disclosure: We are a participant in the Amazon Services LLC Associates Program, an affiliate advertising program designed to provide a means for sites to earn advertising fees by advertising and linking to amazon.com, amazon.co.uk, amazon.ca, amazon.de, amazon.fr, amazon.it and amazon.es. Amazon and the Amazon logo are trademarks of Amazon.com, Inc. or its affiliates.