If you’re a fan of the Russell Crowe movie or TV shows like ‘Spartacus’ then you obviously enjoy ancient Roman history and likely find Gladiators sexy and exciting. If that’s the case you really should take the Colosseum Underground Tour with City Wonders (formerly Dark Rome).

Don’t like group tours? The Colosseum Underground Tour will change your mind.

The Colosseum is one of the top 10 monuments to visit in Rome so you can’t possibly go to this ancient city without a tour of this iconic building. Even if you generally prefer self guided options or think you know enough about the Colosseum to go it alone you, need to think again. Take it from someone who had already visited twice, after the Colosseum tour with City Wonders I felt as though I had just seen it for the first time.

The Colosseum Underground Tour takes you into limited access areas that the general public don’t get to enter. This allows you to see the spectacular arena almost as it would have been seen by both the spectators and Gladiators more than nineteen hundred years ago. All without the hoards of other tourists jostling for a good view pint or selfie spot.

Stand on the Colosseum floor and look up at the crowd

The first special access you’ll be taken to is the arena floor itself. A platform has been built in place of the now crumbled original floor and here you will stand with your small group away from the crowds of other tourists stuck in the general access areas. You’ll have plenty of time to look up and around at the vast arena above you and imagine the roar of the crowd as you battle for your life. You’ll also have plenty of time and space for those gladiator pose pictures.

Leaving the Colosseum floor you will be led through a gate and down stone stairs to the heart of the arena. Underneath the floor is where the all the behind the scenes action took place. For the first time in history you can now see where that gladiators awaited their fate surrounded by cages of wild and exotic animals. You will walk down tunnels and corridors following the footsteps of the gladiator and can imagine the fear and adrenaline hanging in the air. If you have any theatrical experience you can probably take the energy of backstage and multiply it by 100. Sadly in the case of these performers the final curtain call has a very different meaning.

The players in this brutal form of entertainment would be sent up on lifts to appear magically on the Colosseum floor and would likely not know what they would be facing. Another gladiator? A Lion? Very exciting for the spectators but terrifying for the gladiators. There is a modern version of the ancient lifts being constructed that will eventually be demonstrated on these tours.

Thankfully we did learn that the gladiators were very rarely forced to fight to the death as it actually cost the Lanista or sponsor a lot of money to purchase and train them. Therefore a death would be costly.

Hey for all we know there could have been examples of WWF type theatrical fights (spoiler alert for WWF fans). The other misconception is that Christians were thrown to the lions at the Colosseum. Apparently Pope Benedict the 14th claimed that Christians were martyred here in order to have it sanctioned as sacred ground and therefore protected. There is however no historical mention of this happening at this particular amphitheater. If it hadn’t been for this proclamation this historical site would likely not be as well preserved for us to visit today.

See the Colosseum from the ‘cheap seats’

For the third act you are taken through another locked iron gate and up more stone stairs to the very top of the Colosseum. We would call them the ‘cheap seats’ these days although back then the games were free for everyone. This top level offers spectacular views not only of the Colosseum but also of the Palatine Hill and Roman Forum. 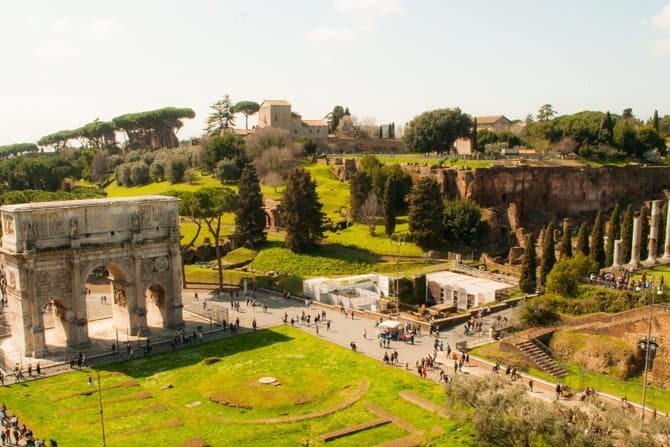 Once the tour is over you are free to wander around the areas open to the general public. At this time, as you get herded by the crowds, you really appreciate the special treatment of the tour and will be thanking us for recommending it!

–The Colosseum Underground tour also includes a guided walk through the Roman Forum and Palatine Hill grounds. It is detailed enough that you likely won’t need to pay for a separate visit.

-There are several tour companies offering the underground version but our experience with City Wonders (Dark Rome) was exceptional. Our guide was an archaeologist so she was incredibly knowledgeable as well as friendly and thoughtful of the group experience. From start to finish everything and everyone was very well organized and professional.

–Once inside the Colosseum the tour is conducted by an official Colosseum guide but the City Wonders guide stays for the duration to make sure the group is well taken care of.

-Due to the efficient system of the Colosseum tour itself your group must be at the gate at a specific time so being late to the starting point may find you left behind or facing some upset fellow tour members. It can also mean less time for the Roman Forum portion…so don’t be late!

–The tour is 3.5 hours long and group size is maximum 24 people which is small enough that you can always feel close to the guide and the sights. Your small group will also be the only group in each limited access area so you never feel rushed or crowded.

–You are given earphones so you can easily hear the guide at all times and the guides will do their best to cater the tour to each individual groups needs.

-These tours are very popular and due to the limited group size they do sell out so try to book in advance!

Pin It For Later!

~ Much thanks to City Wonders for hosting us on this fabulous tour. As always the opinions in this post are entirely our own ~

Born in England, Sarah developed her wanderlust at a young age as she traveled around Europe with her parents. As a young adult she spent every penny she could on experiences as opposed to possessions. Eventually she found a way to earn a living doing what she loved: traveling, writing and capturing images of the wondrous world we live in. When not on the go Sarah enjoys time in her “sometimes home” of Vancouver.

Amazon Disclosure: We are a participant in the Amazon Services LLC Associates Program, an affiliate advertising program designed to provide a means for sites to earn advertising fees by advertising and linking to amazon.com, amazon.co.uk, amazon.ca, amazon.de, amazon.fr, amazon.it and amazon.es. Amazon and the Amazon logo are trademarks of Amazon.com, Inc. or its affiliates.